To celebrate the 25th Anniversary of the Dutch Barge Association (DBA) a flotilla of barges was organised to rendezvous at Chatham Marina in Kent. This coincided with the Chatham maritime food and drink festival. A plus on many points but mainly giving me the opportunity to experience how Angela Dawn handles in the tidal river and estuary whilst in the company of experienced boaters.

I transited solo down to Limehouse, London on the 17th May covered in my previous post. It was interesting staying in Limehouse for a week and meeting some of the residential boaters. Finding walks for Nutty was difficult but she got used to going on the Docklands Light Railway (DLR) and visiting the Grapes pub.

I was joined by my crew, Geoff, Mick and John. We’d done narrowboating before and I knew them all capable sailors and very experienced drinkers. 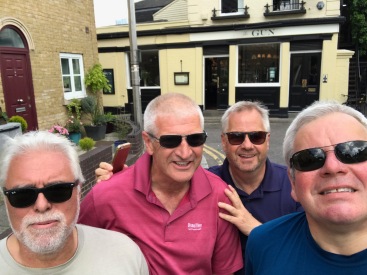 We left Limehouse on the 24th with 2 other barges and cruised the 3 miles round the other side of Canary Wharf to West India Dock. Staying here for the night we met up with the rest of the DBA floatilla. It seemed bizarre mooring up beneath the financial power houses of London. West India Dock is controlled by the Canal and River Trust. The lock is huge and requires the bridge over a busy road to be raised. The lock was extremely gentle which cannot be said of the river.

The following day 13 boats re-entered the lock for the transit to Chatham. We could probably have got another 13 boats in it was that large. It must have been amazing in its heyday.

Holding up the road traffic 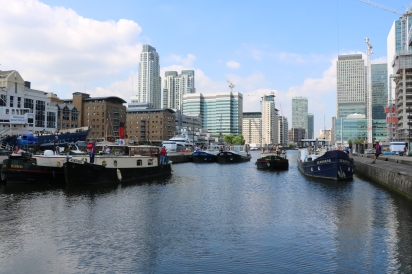 All in the huge Lock

In the narrower reached of the Thames and with several small faster boats around us the water was quite choppy from side to side. Passing through the Thames Barrier was exciting and the river widened significantly with less side to side chop. The scenery became very industrialised. 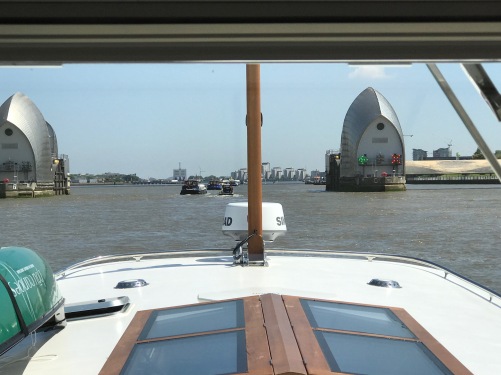 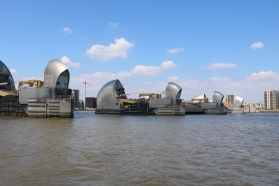 We remained close to the back enjoying the view of the barges ahead. As the estuary widened the head on chop and swell increased significantly. With the tide now pushing us downstream  we maintained a steady 8 – 9 knots it was quite exhilarating bashing of  the swell. 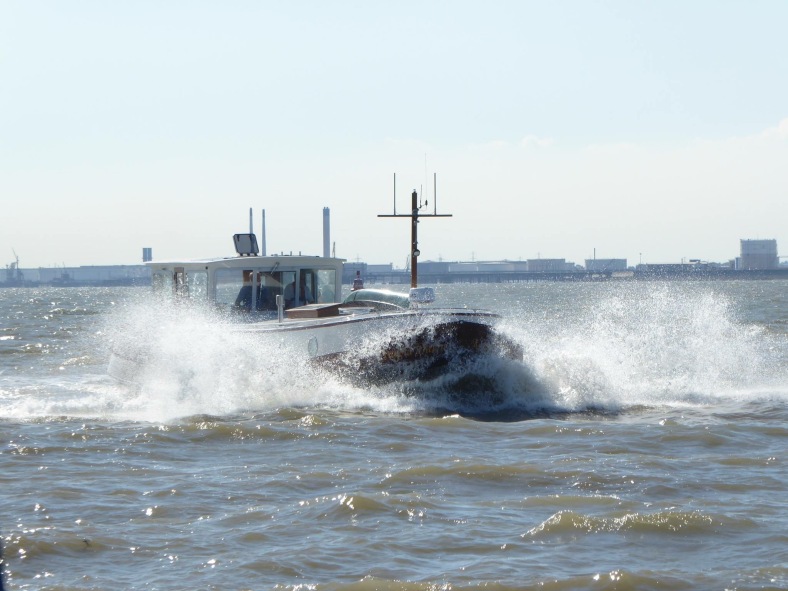 It took around 6 hours to clear the Thames and turn into the river Medway. Tide now pushing us up stream this was a far more gentle journey.

Half way up we came across a barge who’d had engine trouble and was drifting. We turned around and took her in tow. It turned out to be a engine cooling pipe that had split and under pressure was putting a lot of water into the engine room. A sober reminder of being a single engined boat. On arriving at Chatham we deposited our tow at the mooring pontoon in the river and joined the queue to enter the lock. This was a slow process as the lock only took 2 -3 boats at any one time and has to lift a road each time. 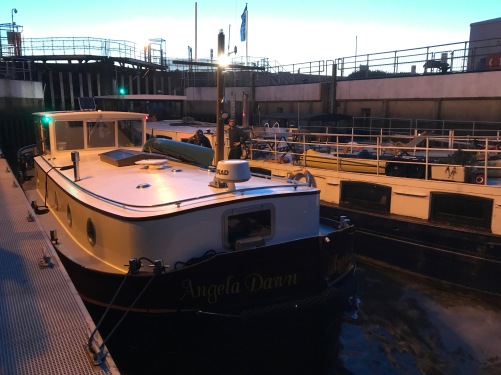 In addition to us were a flotilla of Little Ships that took part in the WWII Dunkirk rescue. The weekend was fabulous, making new friends, drinking too much and exploring the historic dockyard. The boats were all dressed in flags and bunting. We managed to get some real class plastic bunting with flashing lights! 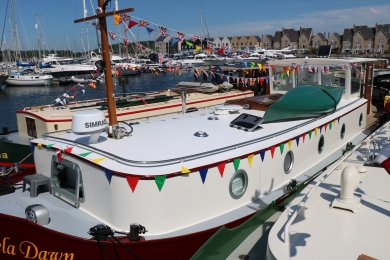 On Monday evening we and 4 other boats left for Queensborough for a night stop. This is 2 hours down the Medway and meant it would be quicker for the remainder to leave the lock the following day. 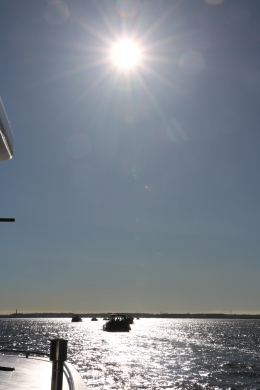 On Tuesday morning 10 boats reassembled in the estuary and turned back up the Thames. This was a much smoother passage but it’s amazing how long the Thames is from London to the sea. Most stopped at West India while we and Dea Latis carried on round to Limehouse. 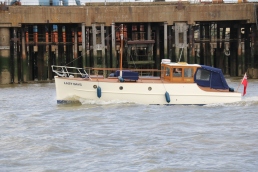 One of the Dunkirk Little Ships

The following morning we set of alone back to Teddington. Leaving 3 hours before high water we were quickly driven upstream. This time the river was very busy with the tourist boats, water taxis and working craft.

The sights flew by, after Kew it was clear we were going to arrive early for the Richmond barrier which holds water in the upper Thames so slowed down. By the time we reached Teddington another 5 of the barges had joined us and we all went through the longest lock at Teddington together.

An amazing experience that has given me huge knowledge of the water and confidence in my magnificent boat. Many thanks to my crew, Geoff, John and Mick. Also to Caroline and Andy Soper for organising the event and all the other bargees.

2 thoughts on “Windsor to Chatham, Kent”