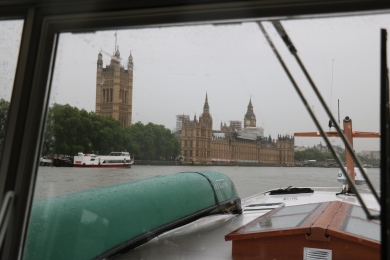 The Thames from Teddington downstream is tidal. Although from Teddington to Richmond it’s known as the half tide. At Richmond there’s a barrier which is raised roughly 2 hours either side of High water. Outside of this you have to use the lock but there may not be much water in the river once you leave. The barrier is to keep sufficient water for boats up to Teddington regardless of the tidal state. 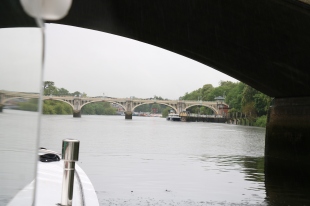 It was chucking down with rain but thankfully no wind. Cruising time to Limehouse (Canary Wharf) expected to be around 3 1/2 hours. I’d pre booked to enter the lock at Limehouse for 2040. I was keen to get going and called the lock keeper at Richmond at 1640 to check the water and barrier state, he assured me the barrier would be up by the time I arrived.

Teddington to Richmond was straight forward, as forewarned a little shallow around the bend to Eel Pie Island, showing less than a meter below my hull so move out. As promised the Richmond barriers were up. It seemed quiet, perhaps either the time of day or rain. As usual there were plenty of rowers, most following the guidelines and the odd one not looking behind or crossing in front of you at an inopportune moment. 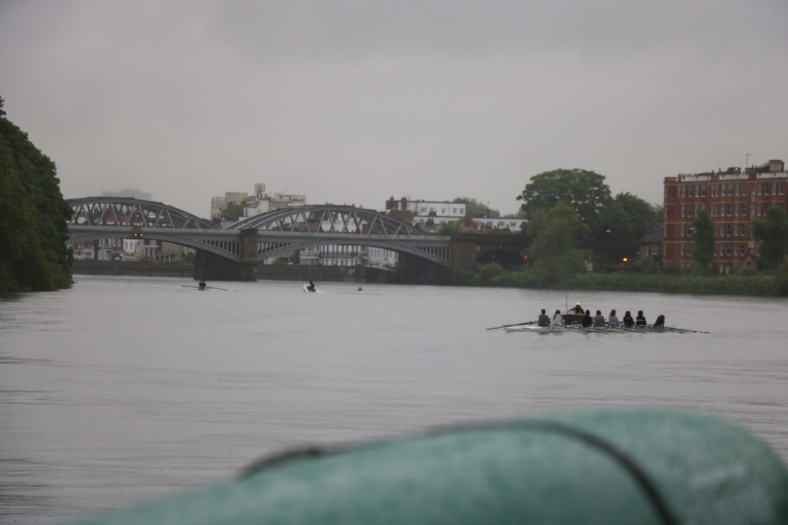 For half the journey I was punching into an incoming (flood) tide. At 1800 rpm I held a reasonable speed of 5 – 6 knots. My chart plotter was giving me my location but I also marked the bridges on the good old fashioned paper chart which I’d already made note on. 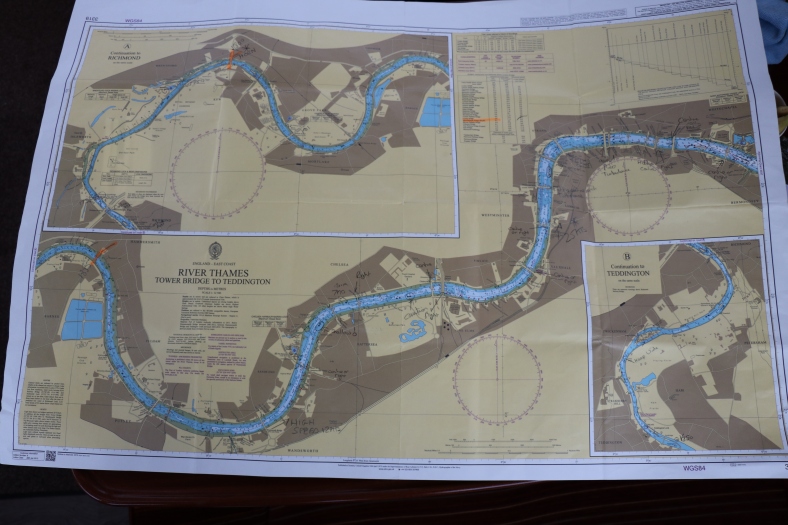 Numerous bridges to pass made it easy to know where I was. The only bridge of concern was Hammersmith, the clearance at Highest Astronomical Tide (HAT) is 3.1 meters. Angela Dawn has an air draught of 2.85 meters with the mast half down and 4 meters up. The mast was half down. As I approached Hammersmith it was almost High tide, not as high as HAT. To be safe I slowed and made sure I was going under the highest point. I guess there was 2 feet of clearance above the wheelhouse, I’d have certainly lost my mast aerials had they been up. 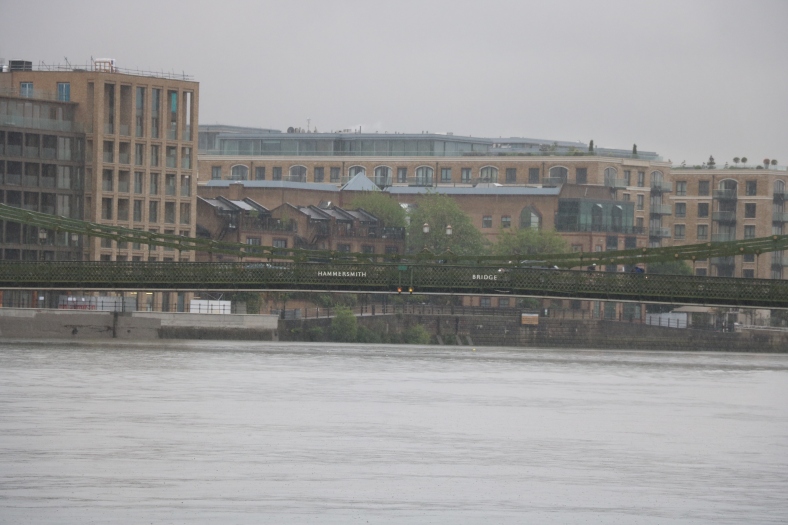 From Hammersmith the river widened and there’s more commercial traffic about. Mostly the passenger carrying cruisers. As the tide turned my speed increased gradually until I was cruising easily at 8 knots and 1200 rpm.

Bridges and famous landmarks came up fast, my radio is equipped with AIS an automatic identification system mandatory for large vessels. This sends an alarm whenever a vessel is in close proximity. As I passed the Houses of Parliament there were 8 warnings which also displayed on the chart plotter. I’d been looking all around but this showed a clipper coming up behind me at around 20 knots. As I went under Blackfriars bridge I had to slow for a dining clipper in front as the one behind sped past on my left side. I then overtook the dining clipper, what fun.

It’s a requirement of boats over 13 meters to carry and monitor VHF radio and notify London Vessel Traffic Service (VTS) of your passage. As I left Teddington I called them by mobile phone as I knew the radio coverage would be poor this far upstream. I made radio contact at Kew Bridge. Monitoring the frequency helps build up a picture of where the bigger boats are. They also broadcast regular river updates. As I passed Limehouse basin which is on the opposite bank (North) going down stream (keep right on rivers) I called to ask if anything was coming round the corner, with the all clear I crossed the stream and called the Lock keeper at Limehouse. I was now into the tide again which slowed me down significantly. 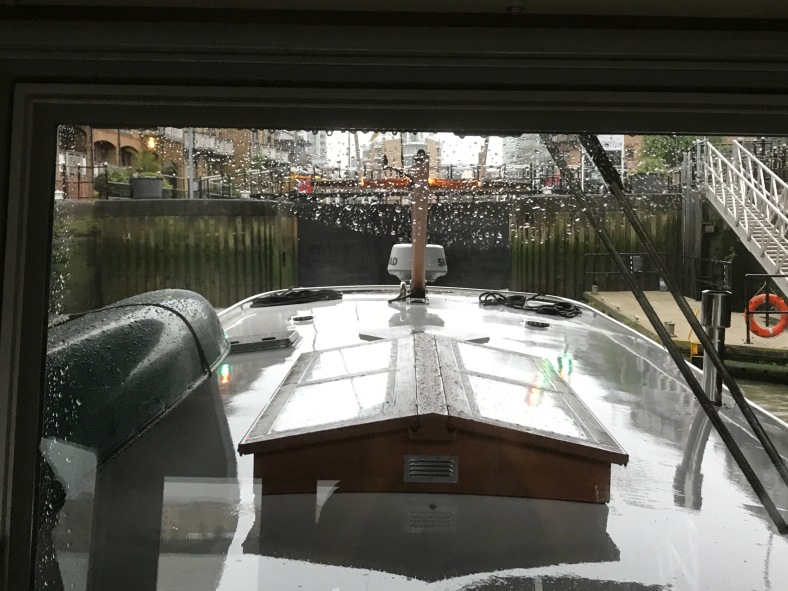 The turn into the lock entrance was fairly straight forward but because of the entrance design it was quite turbulent with the ebbing (Outgoing) tide swirling round, holding for the lock to open was a little tricky. Once safely in the lock it was a simple operation of holding on with one rope around a plastic covered chain. I received a very warm welcome and instructions from the lock keeper Gary on my mooring position. I took it very slowly onto the mooring, conscious that I was quite tired. Once tied up, Nutty walked and both dry it was time for a large whisky and beer. Yes both, because I can.

A most exhilarating venture, I think being later in the day helped with less small traffic. The tides worked fine and Angela Dawn kept up a reasonable speed. I may consider a very early start another time to try and avoid the rowers but otherwise the tried and tested plan by others worked for me. Next week it’s a cruise to Chatham, even bigger water with a flotilla.

I forgot to add my crew mate remained relaxed throughout!! 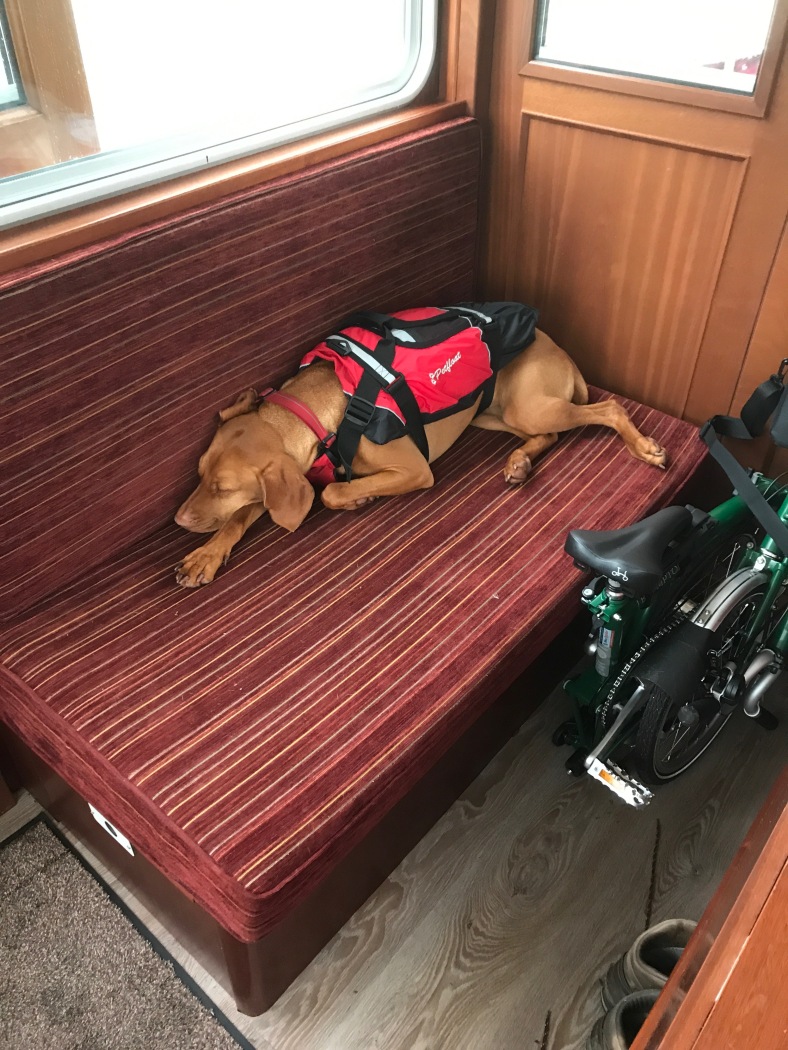 2 thoughts on “Teddington to Limehouse Basin”