Narrowboats – These are flat bottomed usually no wider than 6’10” and vary in length up to 72′ although some canal locks are shorter and 57′ is considered a maximum length to fully utilise the canal system. These boats are not particularly tall to cope with low bridges and tunnels and being flat bottomed can cope with shallow canals. Control of the boat is from a tiller at the stern which may have a canvas removable cover to protect the helmsman in poor weather. 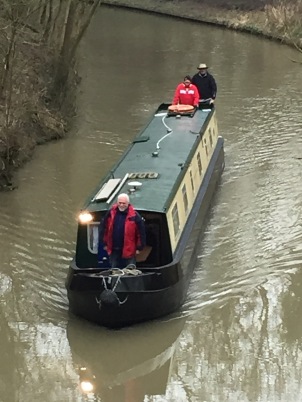 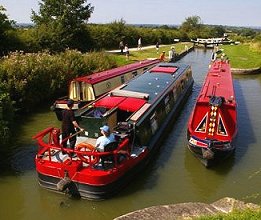 Widebeam (Narrowboat style) – These are similar in design to a traditional narrowboat but can be up to 10′ in width. This gives a much larger living space but is restricted in which waterways it may operate.

Dutch Barge – and replicas can be 49′ up to 130′ in length and 12′ to 26′ wide. Originally designed to work the huge waterways of Europe. Working barges are common on the Continent. Many have been converted into homes. Dutch barges are even further restricted on the UK waterways but most are suitable for coastal (not sea going) sailing. Crossing the English Channel is perfectly possible but only advisable with a qualified Skipper. These boats start to look more like a ship and are registered on the Small Ship Register. The keel usually has some V shape to add stability in tidal water. Steerage is from a wheelhouse using a ships wheel. Some modern designs have a collapsible wheelhouse for waterways with low bridges. There are many different designs of Dutch Barge some still utilising sail and are a delight to see.

England’s 2000 mile canals and some rivers are maintained by the Canal and Rivers Trust a charitable organisation which replaced British Waterways in 2012. The trust is financed by grants, rent from canal/riverside property and licences. Boat are required to have a licence to put a craft on the water. Most locks are self service although popular locks and flights may have volunteer lock keepers helping the traffic through. On larger rivers and canals particularly in the north of England the locks are huge and are operated mechanically from a control box. Roughly 40% of the network is narrow and unusable to Wide beam and Dutch Barges. This is particularly the case for the Midlands. The network map can be seen here; Waterways map . 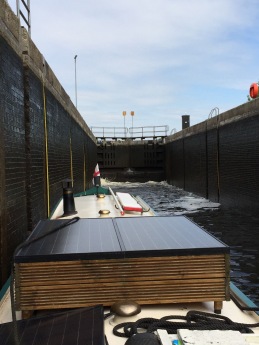 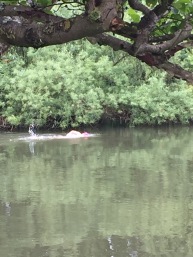 I’ve chosen to start my boating life on the river Thames. The Thames source is in the Cotswolds. The Non tidal river runs to Teddington Lock west London. This part of the river and its 44 locks are maintained by the Environment Agency. The river is navigable by narrowboat to Lechlade. A Dutch Barge wouldn’t get beyond Oxford because of low bridges. The locks are manned, mostly volunteers for most of the year or self service using an electric control box. A separate licence to the canal network is required for this part of the Thames from the EA.

The tidal Thames from Teddington to the sea is controlled by The Port of London Authority. A licence is not required but you are restricted by the tideway, there are significant rules and regulations to adhere to. Moorings are very limited to marinas and a few launch areas or anchor in the estuary beyond the Thames barrier and clear of the shipping lane.

If as I, you intend to live aboard your boat you need either a residential mooring or are known as a continuous cruiser (water gypsy).  Residential moorings are difficult to find, these are usually in marinas some river/canal side, some come with services such as electric hook up, water connection. This mooring is advantageous if you’re working, have kids going to school or just happy not to move around. For short visits there’s numerous marinas to stay in. All at a cost of course. If the plan is to cruise though, why pay for an unused mooring?

Mooring on canals is easy, most canal side are free and you can stay for up to 14 days. Some popular moorings have time restrictions 24/48 hours. There’s little water flow and the level changes slowly. The canal network has hundreds of marinas.

Mooring on rivers is different, there are less moorings than the canal network, banks may not be unsuitable to moor alongside or privately owned and restricted. On the Thames there are few free short term moorings. Mooring on private land will almost always come at a cost. You could anchor. River conditions particularly in the winter have to be watched very closely to ensure you don’t end up beached in a field after a flood. Moving can be restricted and dangerous in a fast flowing river. The Environment Agency provides daily information on the Thames condition. Provided you keep an eye on the river conditions, are ready to adjust mooring lines then flooded rivers can be handled safely. Most boat sinkings occur when people moor their boat on the riverside, leave and forget it for the winter. They come back and find the river level rose and their mooring lines too short held the boat under water, Oops.

Again there are marinas available at a cost.