Crossing The English Channel was delayed because of unfavourable wind and tides. David Piper, founder of Piper boats and my pilot for the crossing has taken many boats across and I certainly wasn’t going to question his decision. Listening to Davids history I was glad of his experience, knowledge of the sea and of the boat. He gave me many tips and advice regarding the boat and boating in general. 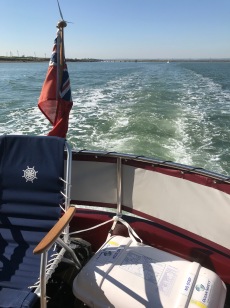 We departed at 0850 on Monday 25th June for what turned out to be a very uneventful crossing. The winds picked up slightly against the tide causing some swell as we rounded the English coast at Margate. From there it was a steady south easterly heading almost direct to Calais. The weather was delightful, good visibility and the sea calmed down again once in the Channel. The Marine Traffic App makes the area look very busy, and it is, but it’s a big stretch of water. I found it difficult to assess distance, being worried about conflicting vessels that were actually miles away and at our comparatively slow speed were never a problem by the time we came close. One ship a Maersk line container ship did cause us confusion, it was massive, even from a distance. The App was showing it had departed Rotterdam with no destination. It seemed to have stopped in the southbound traffic lane and then turned back towards our track, perhaps they’d forgotten a suitcase!! It proceeded north towards us travelling the wrong way up the traffic lanes passing us to the east.

As we approached Calais you could see a steady stream of ferries in and out from Dover to the south. We seemed to be lucky timing our arrival between peaks in ferry movements. Calling Calais on the radio we were instructed to hold out for one departing ferry. Again our slow speed in comparison meant that this ship was well gone before we entered the Port. We entered port at 1715, 8 hours 25 minutes after departure from Queenborough. In port we held on a mooring buoy outside the entrance to the marina awaiting the water to rise allowing us to enter the harbour at 2200.

Piper barge Victoria was in the marina and her owner Stuart ready to help with the lines. Calais marina is safe, modern with floating pontoons, electricity, water and wifi all for 35€ per night. 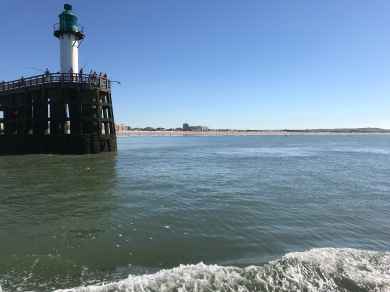 The following morning David showed Stuart how to get onto the canal network and I tagged along for the useful experience. David departed on a ferry and I remained in the marina for a further 2 days. The fuel was on a self service pump, you just popped the credit card in. I last filled the tank in Windsor then cruised to Teddington, Queenborough and Calais using 258 litres of fuel including a bit on generator and water heating.

I stayed in Calais 3 nights waiting for Jo and Nutty to arrive. Calais was a very pleasant surprise, nothing like the chaos depicted on the UK news. Clean, friendly, with nice beaches.

There’s a large Carrefour 5 minutes drive but local shops in easy walking distance of the marina. Plenty of bars and restaurants many of which were not open, guessing it’s busier at the weekend.

For those considering the trip to France these are the actions I took to prepare, or those I recall.

5 thoughts on “The English Channel”